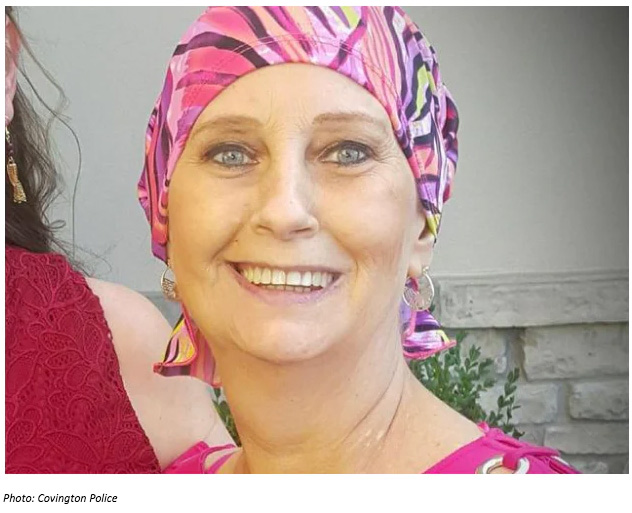 A terminally ill 58-year-old Kentucky cancer patient was murdered in her home during what is suspected as a robbery attempt to obtain her narcotic pain medications. Her 38-year-old cousin was arrested and charged with the crime shortly after the victim’s body was found in the woods near Rabbit Hash, Kentucky, according to media reports.

Police suspect Kenneth Maurice Jones and three accomplices killed frail Denita Satchwell, stowed her body in the trunk of her vehicle overnight and then dumped her in the woods. Three other suspects have been taken into custody. They include 18-year-old Breadon Reaves who is charged with facilitation of murder. The two other suspects are juveniles. Police arrested one of the juveniles on June 20. The other three suspects were arrested on June 14.

Jones and one of the juveniles face charges of murder, robbery and tampering with evidence. Police say it will be several weeks before they can make a definitive statement on how Denita Satchwell was killed. It is also not known at this time how police were able to find and arrest the four suspects. A judge set Jones’s bond at $1 million.  A preliminary hearing is set for June 26.

Satchwell’s daughter Amy Brewer told a local radio station that she believes robbery of her mother’s pain medication was the crime motive.  Jones, the prime murder suspect, had recently visited Satchwell and begged her for her medicine, Brewer said, adding that he was a former drug user who had relapsed.

“It is one of the most despicable crimes I have seen in my 20 plus years,” Covington Lt. Col. Brian Steffen told People Magazinein a separate media report on Satchwell’s killing.

Satchwell’s daughter filed a missing person’s report for her mother two days after she disappeared. Police initially suspected the murdered cancer patient might have taken her own life because of her illness. But those who knew her rejected this idea and maintained that Satchwell was battling her cancer and trying to live as long as she could.

What convinced her daughter that foul play was involved was the presence of Satchwell’s dog in the home. Brewer told police that her mother that her mother seldom drove due to her illness and that she would never ever leave the dog behind.

“Her oxygen and her dog that means more than anything to her were left behind,” Brewer is quoted as stating on her Facebook account. “These are things that my mother would not do. Her back door was also found unlocked lamps were knocked over and garbage inside her home, and (in) my heart I feel like there is some type of foul play.”

Satchwell needed the medications to help her cope with pain and may have resisted if Jones and his accomplices demanded them from her.

“She needed medicine every day,” Steffen said in the People Magazine interview. “She needed it for comfort to hang on to life as long as she could.”