Denver Educator Burglarized While at Rally For Higher Pay 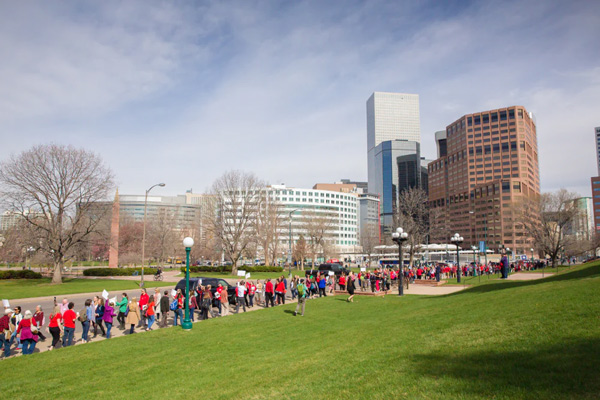 A Denver educator returned home from a rally for higher teacher pay to find she’d been burglarized. Worse than the theft of her possessions was the disappearance of her beloved dog.

“I ran out to the backyard and just called, Ollie, Ollie and he didn’t come,” Bethany Goodman told a local news crew. “Things can be replaced, but I’ve had Ollie ever since I’ve lived in this house so to not have him here it’s just hard,” Goodman said.

Goodman, a counselor for ninth graders at a Denver area high school, expressed concern that the thieves had taken her dog. But she hoped that her two-year old rescue dog, a wire terrier, had been frightened by the home break-in ruckus and had run away.

This happily proved to be the case. Workers at a nearby tile business called Goodman a couple of days after the home break-in when they discovered the dog hiding in their warehouse. They had seen reports on the news about the teacher’s burglarized home and missing pet.

Goodman thanked the “wonderful people” at Denver Daltile Stone for finding her dog. She marveled in a follow-up interviewthat they “didn’t want a dime” of the $500 reward she had offered for the dog’s safe return.

Goodman’s reunion with her pet remains the only bright spot in the home burglary. Denver Police haven’t found the suspects or retrieved any of the stolen items. But they were able to get fingerprints and a shoe imprint from Goodman’s South Shoshone Street home in Southwest Denver.

On the day of the burglary, Goodman returned home at 5:30 pm from the rally at the state’s capitol to find every drawer in her home yanked out with contents scattered on the floor.  Mattresses were tossed off their frames. The thieves pried her TV from the wall and also stole her laptop and all her jewelry.

The thieves entered the home by kicking in a back door. Goodman thinks that her dog escaped from the scene by making a run for it through the opened door.

Goodman took part in a statewide rally to lobby the Colorado state legislature for higher pay for educators. Denver Public Schools, the state’s largest school district with a student enrollment of over 92,000 students, cancelled classes that day due to the large number of teachers joining their peers in the classroom walkout and rally. Many students also attended the rally in support for their teachers.

Colorado currently ranks 31st in the nation for teacher pay, according to 2017 data from the National Educators Association.