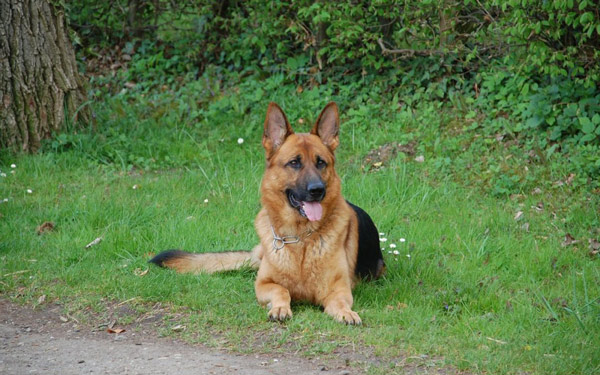 Home invasion burglars shot a family’s pet dog three times last Wednesday as it protected a frightened teen hiding in a closet. The dog, a two-year-old German shepherd named Rex underwent surgery after the shooting.  He is in stable condition and expected to survive.

Two burglars broke into the attractive two-story Des Moines, Washington home shattering a glass door and the quiet afternoon. Javier Mercado, a 16-year-old boy, was the only family member home at the time. Mercado told media reporters that he immediately called 911 and hid in an upstairs bedroom closet. He took the dog, a German shepherd named Rex, with him.

When the burglars began ransacking the home, the dog bolted out of the closet. Running downstairs, he lunged at the burglars. The burglars then viciously beat the animal causing him to retreat to the safety of the closet. But then when the burglars, who had been sifting through the house room by room, reached the upstairs bedroom where the boy and dog were hiding, the injured dog summoned the strength to attack the intruders.

Mercado recalls hearing one of the burglars yell, “…the dog, the dog, the dog bit me, get the dog!” Four shots then rang out. Three of the bullets fired hit Rex, one in the neck and two in his hind legs.

“I think if it weren’t for him, I don’t think I’d be standing here today,” Mercado told a local ABC News affiliate station.

The sound of approaching police sirens ended the ordeal. The burglars fled before police arrived and remain at large. The family remains uncertain whether anything was stolen. Javier Mercado said he spent about an hour in the closet.

“Beware of Dog” Stickers Were Not a Deterrent

The family had posted stickers on their windows that say “Beware of Dog” and showed a photo of a German shepherd. But in this instance, those warning proved to not be a sufficient deterrent.

“Very scary, that’s all I can say,” the boy’s mother Julie Cadena said during an interview at the home. She was full of gratitude toward the German shepherd who she credits for saving her son’s life.

“He was trying to protect Javier, that was his mission there. My hero, my four-legged angel and hero,” she said.

Rex, hailed on social media as Hero Dog, was rushed to emergency vet care where he underwent surgery and other medical treatments to save his life. The surgery, X-rays, scans and other treatments ran up a tab of thousands of dollars at the BluePearl Veterinary Partners in nearby Denton, WA.

To help pay the vet bills, the family launched a GoFundMe campaign, according to USA Today. The dog’s self-sacrificing act of heroism touched people’s hearts. The fund has already generated over $36,000. This amount surpasses the $10,000 goal set by the family.

A family member Susy Cadena said that the family will donate any funds left over from Rex’s medical bills to “institutions and organizations whose mission is to protect our loved pets.”