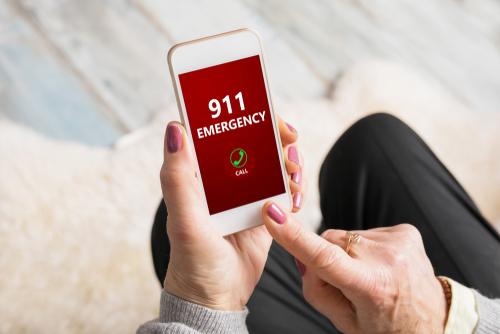 A 74-year-old Kansas woman shot and killed a nighttime intruder into her home. But she was so upset by what had occurred that while she was on the phone with 911 reporting the incident, she suffered a heart attack.

However, the 911 dispatcher was able to quickly send police to the woman’s Leavenworth home. She is recovering and expected to survive.

Intruder Shot Dead from the Top of the Stairs

The terrifying sound of her front door being broken into woke the woman from her sleep at 1:15 am on a recent Saturday night. Because someone had tried to break in the previous week, she’d bought herself a .22-caliber handgun. She slept with it handy. She grabbed it and confronted the intruder from the top of her staircase. She fired.

Police arrived to find 41-year-old Ralph Byrd Jr. dead at the bottom of the stairs from a single bullet to his head. They also found the distraught woman in the throes of a heart attack.

“Obviously,” Leavenworth County Attorney Todd Thompson was reported by the Kansas City Star newspaper as saying, “the county attorney is not going to file charges against the 74-year-old woman.”

Although no charges will be filed, Thompson added, Leavenworth police investigated the shooting as a homicide.

Leavenworth Police Major Dan Nicodemus told the media that the case is, “cut and dried.”

“She called 911. She stayed on the phone. She confronted the burglar and she defended herself.”

Compounding the tragedy, the family of the deceased intruder Ralph Byrd Jr. blames his death on drugs, not the 74-year-old woman who shot him in self-defense.

“She was protecting herself. I’m not mad at her at all. I would have done the same thing. I think anybody would,” Elvis Byrd, said in an interview with KCTV5, a Kansas City tv news station. He said he was sad but not surprised about what befell his older brother.

“I’ve been saying for quite a while now that Ralph was either going to get himself shot stealing from somebody or he was going to OD on heroin.”

He added that his brother’s struggle with addiction has gone on for years. Although the family repeatedly tried to help him, in the end nothing worked. The family posted an obituary for him and has held a funeral.

“The heroin and meth are just outrageous in this town. I don’t know why. I wish I could put a stop to it,” Elvis Byrd said.

Leavenworth Police Chief Patrick Kitchens affirmed that opioids and meth are a huge reason behind crime in the town, notably 300 burglaries to date for 2018.

Ordeal May Be Over but Emotional Trauma Remains

The woman may be physically recovering from the ordeal of confronting and killing an intruder into her home, but neighbors say she remains emotionally distressed. Neighbors interviewed said theirs is a street of stately homes dating from the 1900s and a community where neighbors look out for each other.

“This (killing the intruder) was not something she wanted to do. But it was something that had to be done,” neighbor Jeff Marrin said. He added that his daughter would be checking in on the woman as she recovers from the ordeal.

At Deep Sentinel, we understand that even if as in this instance the home occupant survives a break-in and stops the intruder, the trauma never goes away. That is why we designed our new home security system to prevent crimes before they start. Our live surveillance agents intercept possible criminals at the curb via remote speaker and video camera. They will warn anyone suspicious that they are calling the police and sound an actual loud police siren. Most crooks won’t stick around and wait for the police to arrive.