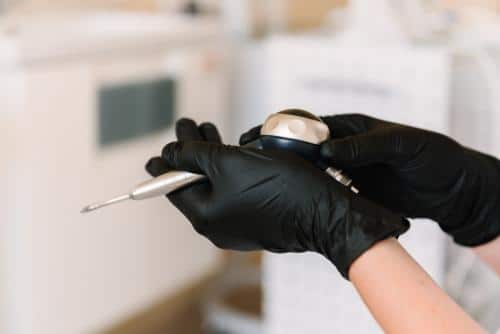 Suspect Pretended to Have a Gun

For all of us who dread visits to the dentist, here’s news to make you even more nervous about your next appointment.  Oregon police reported this week that they arrested a robbery suspect in a local dentist’s office. It is unknown whether the suspect is a patient of the dentist. But he was not there for a check-up. He apparently ducked into the dental office to evade law enforcement officials pursuing him.

Although the suspect reportedly had pretended to have a gun by placing his hand in his pocket and pointing his index finger at the owner of a home he’d robbed, he was unarmed. And he didn’t attempt to use the dentist’s drill against the arresting officers.

This goes to show that even our businesses are not safe, even if you’re a doctor or a dentist. However, ensuring security of patients and clients should be a business owner’s utmost priority. And what better option than a wireless security system for your business with real-time monitoring from live guards?

The 30-year-old suspect broke into the Happy Valley home around noon and started “helping himself” to the homeowner’s possessions, according to OregonLive, the website of The Oregonian newspaper, and other media reports. When the homeowner unexpectedly arrived home and confronted the robber, the suspect made a “finger gun” with his hand inside his jacket pocket and threatened to shoot the homeowner. After making the threat, the suspect fled with the stolen goods in hand.

Deputies from both the Clackamas County Sheriff’s Office and the Happy Valley Police Department responded to the homeowner’s call and arrived at the home on the 12400 block of Southeast Verlie Street.

A jogger in the neighborhood was able to assist the law enforcement officers by pointing out the direction they had seen the suspect run. The officers began searching the area with K-9 unit, local media outlets including local news station KATVU, reported. At 12:46 pm, the suspect was spotted by concerned observers who saw him pacing the grounds near an area preschool and daycare center, Goddard School.  As deputies and the police dog quickly closed in on him, the suspect took off again. This time he ducked into the dental office.

Deputies soon located him again in the lobby of the dental office. When they asked him what he was doing in the dental office, he replied that he had called a friend to pick him up from a dental appointment. “Where’s your phone?”  one of the deputies asked. He replied that it was in his friend’s car. That didn’t add up. So the deputy took the man’s photo and texted it to other deputies who were still with the homeowner at the scene of the crime.

The sheriff’s office, working with the Happy Valley Police Department, reported arresting the suspect. They identified him as Michael Shane Belden, 30. After officers found stolen items stashed near Goddard School, Belden admitted to robbing the house. He is being held in Clackamas County Jail on charges of first-degree burglary and second-degree robbery, with bail set at $290,000.

The sheriff’s office told the media that before deputies hauled him off to jail, Belden asked them to do one thing: Tell the homeowner he was sorry.

No apologies would have been needed if the property had been equipped with Deep Sentinel’s new state-of-the-art wireless home security system or business security cameras​. Even if the homeowner was not able to get to his phone, Deep Sentinel’s artificial intelligence-assisted monitoring system would have alerted our live surveillance agents. Quickly assessing the situation on their screens, they would have immediately called the police. The suspect could have been arrested before he ever set foot in the home – or the dentist’s office.