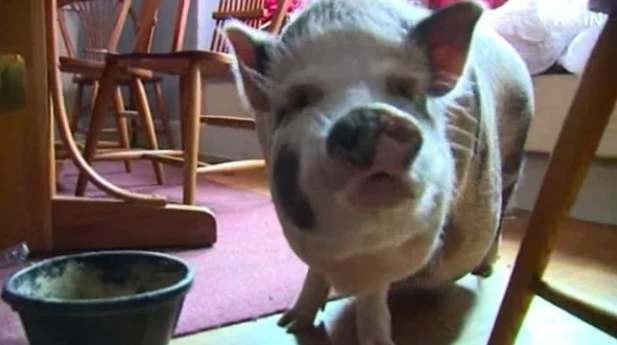 Burglars Startled by Full-Grown Hog in the House

Don’t tell this home burglary hero not to hog the spotlight. Because he just happens to be a hog. And he handily convinced some would-be burglars to turn tail and run without taking a thing.

Police in Indianapolis speculate that some thieves had second thoughts when they saw the full-grown swine barreling toward them. Two other nearby homes with no pet pig to protect the premises were robbed that same day, presumably by the same perpetrators, media reports state. At the time of writing, the police had not yet made any arrests.

Police found the back door to the home completely kicked in with its glass window shattered. And Dumplin’, the family’s pet pig, was there standing his ground.

Family Not Home During Break-In

It is unclear whether Dumplin’ ran to the door to defend the home or because he thought the noise meant his family had come back and he wanted to greet them. Dumplin’s owner, a single mother with four children, is thankful whatever the reason the pig was at the door, his presence prompted the burglars to leave. She is also thankful that she and her children were not home during the break-in.

“It’s scary to think about what if my kids and I would have been home,” she told reporters from ABC News and other media sources. “Yeah, it’s definitely terrifying. You don’t want anything like that to happen.” She also expressed relief that the burglars didn’t harm the pig during the incident.

The homeowner, who asked not to be identified, said she and her children and Dumplin’ had moved into the house on Indianapolis’s east side just a few weeks ago after she purchased it. Now, she says, she has a bit of buyer’s remorse about the home being in what seems to be a high-crime area.

“I guess it’s something that I should have looked into,” the homeowner said. She added, “I didn’t think about it. I was excited to be buying my first home.”

The homeowner told reporters she had adopted the full-grown pig as a rescue earlier this year. “The moment I saw him, I knew. He loved me instantly. He’s perfect. He’s the perfect animal,” she said.

Now she is encouraging others to adopt pet pigs from animal shelters. People often purchase pigs as pets, especially so-called “teacup pigs” and then find they cannot properly care for them; especially as the animals grow to full size. Because of the recent Instagram popularity of miniature pigs, there are now many abandoned pigs in animal shelters in need of new homes.

PETA interestingly has jumped on this story about a pig preventing a home burglary to promote the adoption of full-grown pigs as family pets.

“Considered by animal behaviorists to be smarter than dogs, pigs are clever animals who are also friendly, loyal, and intelligent. They’re naturally very clean and avoid soiling their living areas,” the animal rights group says on their website blog.

While we at Deep Sentinel wholeheartedly agree about adopting a smart pig for a family pet, we think when it comes to protecting your home, you should rely on home security cameras like ours.