Security Camera Field of View: What It Is and Why It Matters 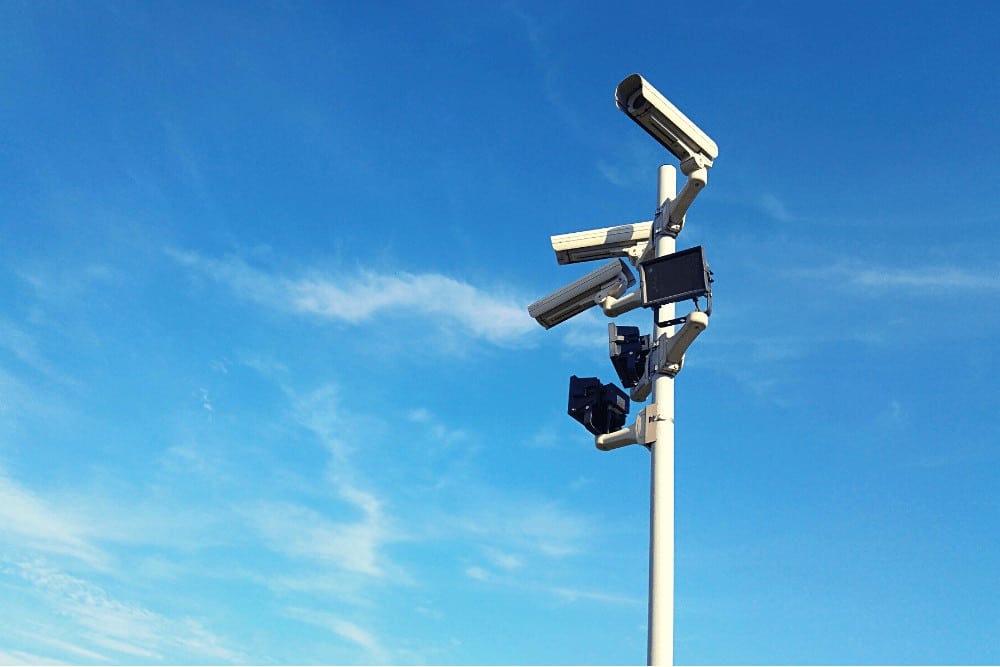 A camera is a camera is a camera, right? Yes. And no. While they all basically function in the same manner, cameras can differ in important but often forgotten ways. For that reason, Camera A might be perfect for a task that Camera B can’t or shouldn’t do. For example, take the camera field of view (FOV), also known as the viewing angle. You’ve likely seen it listed in degrees as part of a camera’s specs. But what exactly is it?

A security camera viewing angle is how much a camera can “see” of the 180 degrees in front of it, and it’s closely connected to the size of the lens. The bigger the lens, the smaller the field of view, but the more detail you’ll be able to capture.

To see that in action, grab your smartphone, open the camera, and point it at whatever is in front of you. The camera “sees” part of the scene, but not the whole thing. Next, zoom in on something. You’ll be able to recognize greater detail, but you’ll have even less of the scene on your screen. The viewing angle has shrunk.

Camera field of view is broken down into five main categories:

What’s the difference, and when would you want each one? Let’s look a little closer.

A superwide-angle (aka ultra-wide) FOV captures the full 180 degrees in front of it. Some of them can even see the entire 360 degrees around them.

That may sound ideal for security purposes, but there’s a catch. A superwide-angle camera warps the image and creates a fisheye effect like you see when looking through a peephole. They can be useful when you want to capture as much of the scene as possible, but it comes at the expense of some detail and clarity.

If you’re looking for coverage of a large area like your backyard or parking lot but aren’t overly concerned with the crispness of the image, you can stop here. Just be aware that superwide-angles don’t usually capture enough detail to identify individuals.

With a range typically between 60 and 110 degrees (or more), a wide-angle FOV sacrifices some coverage for better detail. It’s ideal for security cameras in that sense.

By experimenting with security camera placement, you can usually reduce or eliminate the blind spots created by the reduced field of view. For example, a camera mounted high in the corner of a room will capture most, if not all, of the scene, but one mounted in the middle of a wall will have blind spots on both sides of it.

The photo below shows a security camera with a viewing angle of 90 degrees. 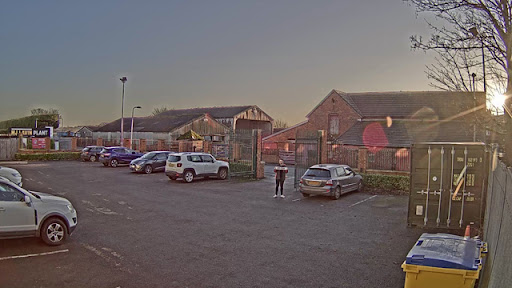 As the name implies, this is the field of view for most cameras. It has a viewing angle of 25 to 60 degrees. You’ll only capture one-third of the scene at most, but with much greater detail and clarity, as objects and people appear closer to the camera. As far as security goes, a standard angle can be quite effective in a small room or if you’re only interested in capturing a specific section of the overall scene.

The photo below shows a 60-degree field of view. 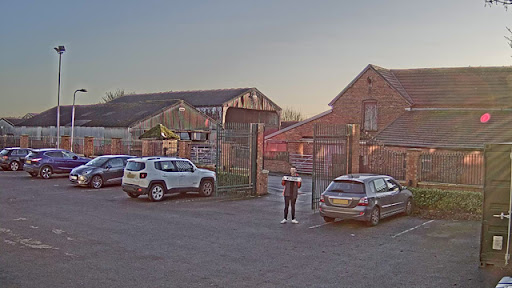 Notice how objects appear sharper and closer to the camera than in the 90-degree photo above, but some items like the garbage cans and cars in the foreground are no longer visible.

At this point, the usefulness for security purposes plummets. With a range between 10 and 25 degrees, the field of view on a telephoto camera is just too small, despite the fact that it captures subjects in much greater detail.

A telephoto field of view is great for zooming in on a particular subject and capturing crisp details, but it’s nearly worthless for monitoring a room or outdoor space.

A super-telephoto FOV is used primarily by journalists and photographers that want stunning detail captured from a great distance. Think wildlife photographer shooting a pride of lions on the savannah or the paparazzi trying to sneak a picture of a celebrity vacationing on a private island.

But at only 1 to 10 degrees in coverage, a would-be thief would literally have to stop on a marked spot far away and smile for it to be of any use in security. You’d have to hope burglars happened to walk through the very narrow field of view by sheer luck.

Compare this photo with a viewing angle of 110-degrees… 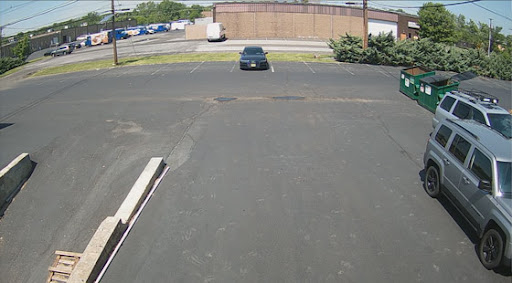 …to the same scene but with a field of view of only 7-degrees: 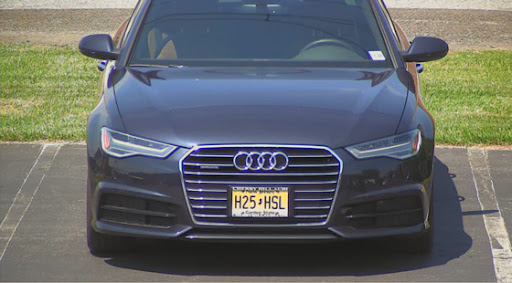 Best leave this one to the paparazzi.

Camera Field of View and Security

For protecting your home, property, or business, you want as much coverage and detail as possible.

A wide-angle camera checks the most boxes: field of view up to 110 degrees—sometimes even more—without the distortion that comes with a superwide-angle. And while it shows less detail than a standard or telephoto viewing angle, you can make up for some of that with a higher resolution—the number of pixels per inch—and quality components. A high-definition camera with a resolution of 1080p, 2K, or 4K can boost image clarity without having to sacrifice too much from the field of view.

Camera height and positioning are crucial, too. Finding the right height for your camera—generally either tabletop or up high, looking down—will allow you to maximize the FOV that you’re working with. 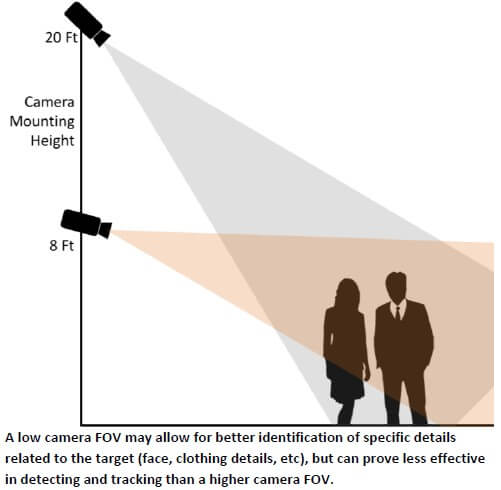 Too high, and it may be too far away to capture specific details. Too low, and you’ll lose coverage. You’ll have to experiment.

Experiment with camera height, but be aware that 8-10 feet is typically the sweet spot.

Experiment with camera placement. Corners in a room and outside edges of a building where two walls come together are usually your best bet, but your unique situation may demand something different.

A camera’s field of view is not an independent variable. The size of the lens, the physical distance between the camera and subject, mounting height, and placement all affect it. Your job—or the job of the security personnel you hire—is to consider them all.

Maximize whatever security camera field of view you have, and you’ll maximize your overall protection.