What to Do If a Car Is Blocking Your Driveway 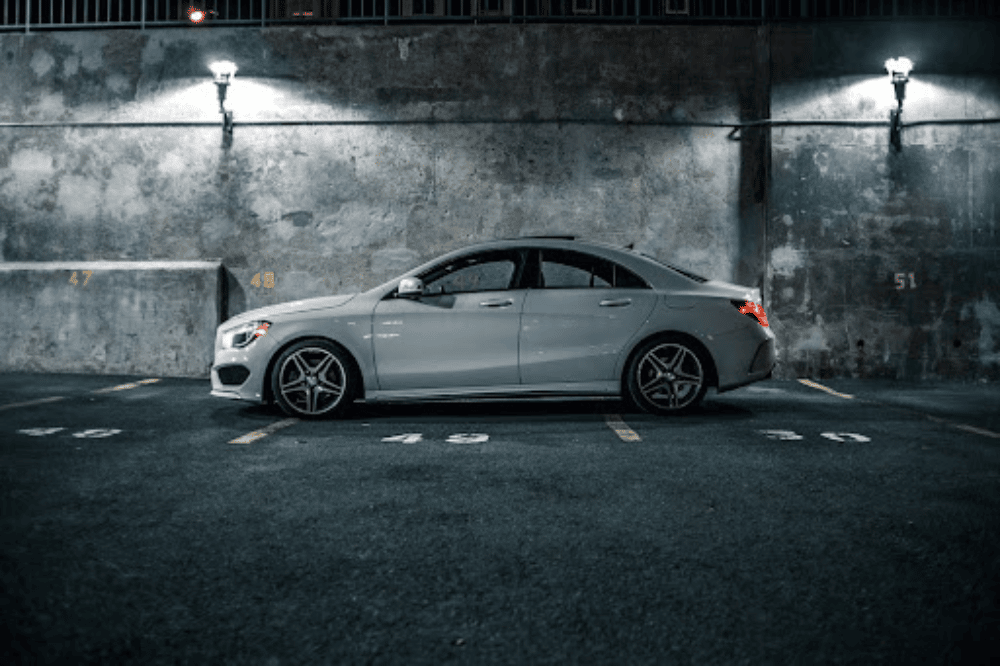 Parking is at a premium in most cities. Downtowns weren’t designed with cars in mind. Older residential neighborhoods can be woefully lacking in driveways. Streets are often too narrow to allow for curbside parking. Underground and multi-story lots can ease the pressure but at an increasingly expensive cost. And if you happen to have a dedicated driveway or parking spot? You’re often at the mercy of someone either stealing or blocking it. A car blocking your driveway is even more annoying than finding parking.

Parking is pricey and time-consuming at the best of times. Consider:

A car blocking your driveway is frustrating and maddening. Short of taking a baseball bat to the windshield to express your dissatisfaction, what recourse do you have? Call a tow truck? Perhaps.

But that’s not all you can do, both before and after it happens.

Is It Illegal to Block a Driveway?

Municipalities have rules and by-laws on the books regarding where you can and can not park. So is it illegal to block someone’s driveway? Absolutely. Law enforcement officers can issue a parking ticket and/or have the car towed and impounded at the owner’s expense.

Contact your local government to learn about the specific rules in your area.

How to Report a Car Blocking Your Driveway

Again, there may be minor differences from place to place, but it’s a safe bet that blocking your driveway is illegal. You are within your rights to notify the proper authorities.

As a rule of thumb, call the police via the non-emergency number. That’s 3-1-1 in more than 100 cities and towns across the States, including San Francisco, Boston, Chicago, and Oakland. The operator will forward your call to the appropriate department. Some of the bigger locations like Los Angeles and New York City also have 3-1-1 mobile apps to make it even simpler and more convenient for citizens. You’ll need to provide your location, the make and model of the vehicle, and the license plate number. Have that information ready.

You could call a tow company directly to remove a car parked in or blocking your driveway, but it’s better to first contact the authorities. Why? Because it removes you from the equation and protects you from potential liability—to say nothing of the angry owner—if the car is damaged. Besides, many tow providers won’t remove a vehicle until officials has ticketed it.

And if the car is parked illegally, the total cost involved is the responsibility of the owner. You’re not on the hook for a single penny.

That said, the best option is to first try to locate the driver and ask them to move their vehicle. It’s often all you need to do. Give them a minute. Look around. Maybe ask a neighbor or two. You can often find them nearby. Remain civil—as the last thing you need at that moment is a combative confrontation—but firm. And if you face any hostility or aggression, remove yourself from the situation and call the authorities.

At least you tried.

And if you can’t find them but are in no hurry to get out, a note left on the windshield may do the trick. Politely explain that they blocked you in and ask them to not do so again. Sometimes people simply don’t realize they’ve inconvenienced someone else.

How to Stop Unwanted Parking

A car blocking your driveway can instantly ruin your day. Imagine you’re running late for work, to pick up the kids, or to meet up with some friends. You complete a mad scramble around your home getting ready, dash out the door, and meet a 4,000-lb roadblock. You’ll pull your hair out, swear, and stamp your feet. Even a quick resolution is only going to add to your stress level.

If only it could be avoided in the first place.

Sadly, there’s nothing that will erase the possibility, but you can take proactive steps to reduce the likelihood. 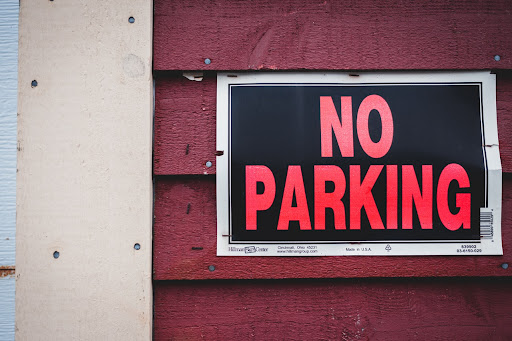 We tend to follow those instructions. If for no other reason, it removes our ability to plead ignorance. “I didn’t know I couldn’t park there” doesn’t carry much weight when there’s a NO PARKING or PARKING PROHIBITED sign clearly visible. No one can argue against a ticket or tow when nearby signage explicitly explains the consequences.

And it will probably make you feel less guilty about calling it in, too. Win-win.

You can purchase ready-made signs from most hardware and department stores, plus online retailers like Amazon. Even a homemade sign is better than nothing. To really cover yourself, get a sign that mentions “violators will be ticketed and towed” or something similar beyond the basic “Do Not Park” or “Do Not Block Driveway.” They’ve been warned.

Depending on where the driveway is located, you might even be able to get something more official from your local council.

Going a step further, purchase a few orange traffic cones and place them across the end of your driveway.

Cones are readily available, cheap, and portable. But a few spaced across your driveway create a physical barrier that must be removed before someone can illegally park there. It’s hard to argue your case when you had to actively remove bright orange deterrents beforehand.

You can quickly remove or replace them every time you come or go. Toss them in your trunk and they’re always at the ready. Just make sure you’re not accidentally blocking a legal parking space. Otherwise, it’s you who’s in the wrong.

Sometimes, a driveway is an obvious driveway. But at other times, it might not be so apparent. A driveway behind a property, in an alley, or anywhere else less evident may get blocked because no one recognizes it for what it is.

In this case, some proper payment paint—bright yellow or otherwise—can clearly indicate your space. Ask your local government, building, or property management to get it done. Failing that, do it yourself. (Just make sure you’re allowed.) Outline the driveway or spot itself, and add the words “Tow-Away Zone” or something similar. Make it big, bright, and bold.

Most people are decent human beings and won’t knowingly block a driveway or parking spot. So make it glaringly obvious.

Hang a Rope or Chain

Similar to using traffic cones, this solution is a little more robust and difficult to ignore. If you have (or can install) a few low posts on either side of your driveway, you could drape a heavy rope or chain from one to the other. Make it a foot or two above the ground.

This prevents a vehicle from entering and acts as a deterrent from parking in front of it. If a driveway looks used and protected, most drivers will avoid blocking it. You can really hammer home the message by hanging a NO PARKING sign on the chain in the middle.

This is a more permanent and expensive option, but nothing works quite as well as an actual gate—locked or not—at keeping people out of areas where they shouldn’t be. Gated driveways not only increase the security of your home but also keep parking pirates from stealing your spot. Your gate can be fancy with an automatic opener or a manual version secured with a padlock and opened by hand.

Either way, they send an obvious message: this is not a public space. 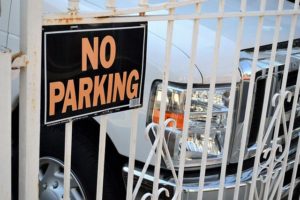 Combine it with proper signage, and you’re golden.

Of course, we recommend video security cameras. And professional monitoring.

Cameras alone will capture the vehicle and driver, which may come in handy should you need to identify or track down the culprit with the police or other law enforcement personnel. It’s reactive and after-the-fact. But cameras with 24/7 monitoring can actively prevent someone from blocking your driveway. That’s proactive and real-time.

Get video footage and images of the car? Or stop the driver before they park and leave? The choice is yours.

Security cameras with professional monitoring can see the action happening in real-time and intervene on your behalf. Two-way audio allows live surveillance guards to talk with the driver. The guard can inform drivers that they’re blocking a driveway with their car and warn them of the consequences if they don’t move it. Not enough? The guard can also record footage of the interaction, capture the license plate number, and notify you via an app, text message, or phone call. And, if the situation escalates, contact the proper authorities.

That’s all in addition to stopping would-be car thieves, vandals, and others lurking around your car or property.

But again, most people will happily move on once informed.

Security cameras with live monitoring save you the hassle of having to deal with the situation and save drivers the expense and time of recovering their towed vehicle. Everyone wins.

Avoid the Hassle of Cars Blocking Your Driveway

Parking infractions are big business in major centers. San Francisco alone collects about $99 million/year in parking ticket revenue. That may sound like a lot, but it’s nothing compared to the likes of Chicago ($264 million/year) and New York City ($545 million/year). The revenue generated is appreciated, but every city spends a disproportionate amount of time, energy, and resources on policing parking regulations, administering tickets, collecting fees, and dealing with related complaints. Yet, there are about eight parking spots for every car in the US.

So let Deep Sentinel do it for you. Proprietary AI, live surveillance guards, and HD wireless cameras with two-way audio and night vision guarantee you’ll never be unexpectedly trapped again.

That way, the only thing you need to worry about is the traffic on the way to wherever it is you’re going. But that’s a problem for another day.