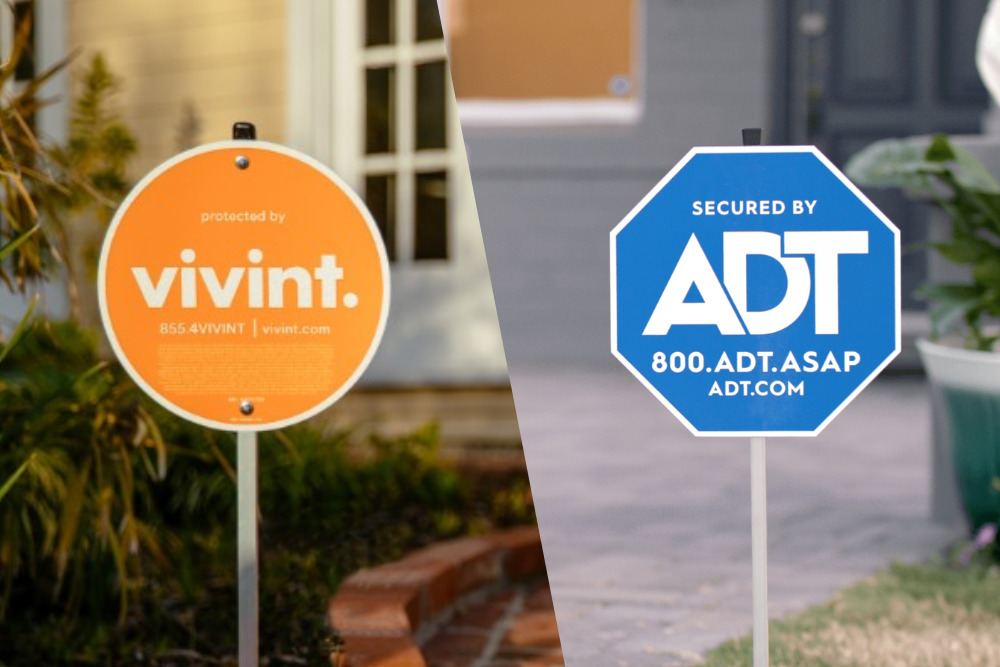 If Vivint and ADT security systems had a showdown, who would win? It’s true that we’ve all probably seen ADT signs on people’s lawns and window decals on their home windows. But that isn’t to say that Vivint (and its orange sign indicating the house has a security system) is a wallflower when it comes to home security. So in the ADT vs. Vivint security competition, is Vivint better than ADT? Or is ADT better than Vivint?

Let’s look at each company in detail and compare ADT and Vivint before answering that.

Vivint designs integrated smart home security systems with features such as professional installation and remote monitoring. The company built its reputation on its “smart” offerings.

With a Vivint system, you can control security and smart devices such as locks, lighting, and cameras on the Smart Hub or using the Vivint app. Vivint’s process starts with a custom design with help from one of its Smart Home Pros.

Once you activate your ADT alarm system, it can report a notification, such as a crossed motion sensor, in any monitored zone within your home. If a sensor triggers, the system transmits a signal through a landline or cellular connection. ADT monitoring centers receive this alert and begin coordinating a response until the threat is over.

You can arm ADT home security systems either directly on the control panel or through the ADT app, ADT Control. ADT Control gives you instant alerts of activity, access to live video footage, and control over your entire system, including smart locks, smart lighting, climate control, and your security devices.

With the ADT SoSecure app, users can alert family or friends of their location or send an SOS for emergency response.

Both Vivint and ADT operate using wireless technology that offers several advanced features. They offer the opportunity to buy an off-the-shelf, pre-designed plan or a customized security system if so desired. For custom systems, the variable equipment can include sensors, controls, and cameras.

When it comes to the plans and systems, Vivint and ADT are similar. Vivint offers two monitoring plans and four security system packages whereas ADT has three monitoring plans and three security system packages. Both have professional installation. Both have that equipment customization mentioned. But in a battle of Vivint vs. ADT, what is different lies in when the contract “kicks in.” With Vivint, there is no contract for 42 months if the equipment is purchased upfront; after that point, it does kick in. On the ADT forefront, a contract begins immediately and runs for 36 months.

If you’re a guarantee-seeking person, that could be a differentiator for you. Vivint doesn’t seem to make a satisfaction guarantee anywhere, whereas longtime player ADT offers its guarantee for six months.

How do their offerings add up as far as your wallet is concerned? The cost of a basic monitoring plan from either provider is roughly the same, just under $30 per month. Upgrading your monitoring service to cover video surveillance will cost more from ADT ($59.99+/month) than it does from Vivint ($44.99+/month). ADT’s pricing includes professional installation, while Vivint charges a small fee.

Of course, the total home security cost of either option depends on exactly which devices and level of service you select. But all in all, the two providers are roughly in the same price range.

So the question remains, should you choose ADT or Vivint?

Vivint is better if you want proprietary equipment because they manufacture some of their own security equipment. It also doesn’t lock you into a contract quite as quickly as ADT does. And if you’re a tech junky dreaming of the ultimate connected smart home, Vivint has been in that space longer and has more integrations.

ADT gives you the opportunity to work with a consultant to evaluate your specific security needs. The provider’s website is much more transparent with pricing and packages, although you still might want some professional “hand-holding” to make sure you choose the right options. And if paying for equipment upfront poses an issue for you, ADT prominently displays how you can roll this into your monthly service charge.

But if you want the best of the best when it comes to innovative surveillance and security, you’ll want Deep Sentinel. 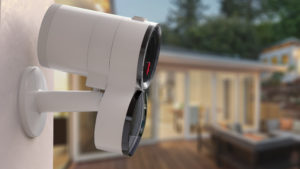 Picture this: You’re home alone. A criminal approaches the house and tries to smash in a window. If you have a traditional security system, like ADT, the monitoring center gets a notification after the criminal smashes the window and enters your home. That notification goes to ADT, alerting a team member of a “triggered alert” in 30 to 60 seconds. At that point, the security representative reaches out to you—who may be barricaded in the bathroom or attempting to flee the house—to verify whether law enforcement is necessary. In the meantime, three to five minutes have passed.

Now, picture the same scene with Deep Sentinel. You’re home alone. A criminal approaches the house. But before he/she can even attempt to smash in a window, the Deep Sentinel security camera system is on high alert. Artificial intelligence deciphers genuine threats (like window-smashing criminals) from false alarms (like the neighbor’s cat). The system alerts live guards within five to 10 seconds of suspicious activity. Those guards can sound a high-decibel alarm as well as speak directly to the suspect, telling the person to step away and advising that law enforcement has been notified.

The result: Preventing crime before it happens, not after a break-in. This entire process occurs in seconds. If a crime does occur, the guards verify the crime and notify law enforcement directly within 30 seconds. Because the guards are “catching” a crime in progress, law enforcement is more apt to respond to this live crime scene.

Other points of interest? You can install Deep Sentinel’s sophisticated technology yourself in about 30 minutes. While ADT has a DIY version of its system, its core traditional system must be installed by a professional installer. And if interacting with visitors yourself is a must-have, you can easily speak to them through Deep Sentinel’s mobile app.

What Homeowners Think of Deep Sentinel

Deep Sentinel earns its stars in the quality department. Homeowners have shared words like these based on their Deep Sentinel experiences:

So if you’re seeking the best of AI and human intelligence, consider trusting your home security and your peace of mind to Deep Sentinel.