Why ADT Is Dead 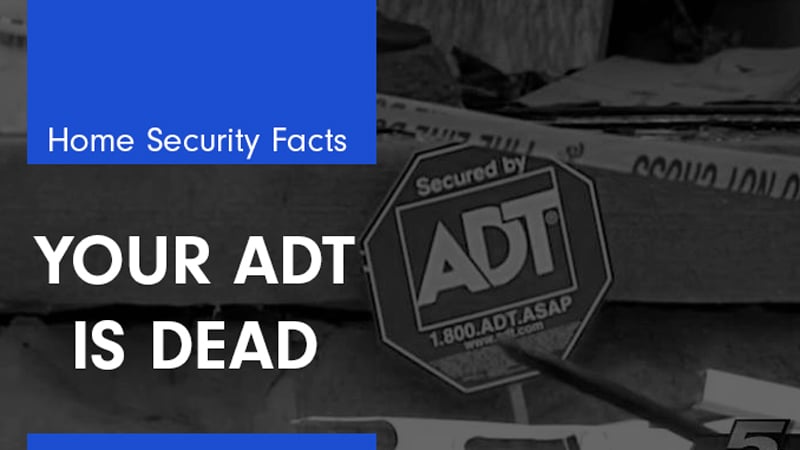 ADT burglar alarms can no longer protect your home and family from intruders. Here is why.

1. ADT Takes Too Long To Call The Police

If an intruder is already in your home, this is far too long.

At that point, it’s already too late.

2. Most ADT calls are false alarms

Many police agencies hate burglar alarms. And it’s not hard to see why:

94-98% of calls from burglar alarm companies like ADT are False Alarms.

This means they can’t prioritize these calls–so in the rare event a burglar alarm catches a real thief, the bad news is that your police agency can’t tell the difference because of the “Boy Who Cried Wolf”, resulting in only a 1% police response rate.

ADT burglar alarms have no ability to hear or speak to intruders to proactively warn them to get off or stay away from your property.  They have no artificial intelligence, live guards armed with video and two-way audio capability like Deep Sentinel offers to actually prevent crimes from happening.

Protecting your home and family is proving impossible for traditional home security systems such as ADT and Xfinity.
One unfortunate family from Pleasanton, CA learned the hard way last year when they were victims of a home invasion. The Legget family was a part of a heinous daytime crime despite the owner having a “state of the art” security system. They were fully monitored with the door, window, glass-break, and motion sensors. They even had two dogs barking at the intruders! So, what went wrong? Xfinity failed. In this situation, safety was not provided by traditional home security systems like ADT and Xfinity.

The Police May Not Be Required To Show Up Promptly

Although the police were notified, most burglar alarm calls are classified as low-priority, which means a slower response time. Why is this? Because 94-98% of burglar alarm calls are false alarms. Seriously, how many times has your alarm gone off for non-threatening reasons?
This new reality has created an environment in which many cities/counties have passed laws expressly stating that they will NOT respond to an unverified burglar alarm call for service. It’s a fact – you’re not safe. Seattle is one major city that passed this law – over 2,000 hours of officer time is wasted every year on false alarms.

According to Freakonomics, “94-98% of all police physical responses to burglar alarm activations are false.” And in the year 2000, police responded to 36 million false calls at an estimated cost of $1.8 billion. The analysis calls out all alarm companies and states that they are incentivized financially to let the false alarm problem thrive. Burglar alarms and their increasing streams of false alarms are a burden to society that makes us all less safe and not protected whatsoever.

ADT has an operating margin of about 25% on roughly $3 billion in revenues. Alarm systems are simply a thing of the past – a dinosaur competing against highly advanced and new technology. To put it as bluntly as possible, alarm systems like ADT are a waste of billions of dollars in police time. We need our cops doing their jobs, not out chasing a dog who tripped over a motion alarm while jumping off the couch. ADT is failing the public and there are realistic and better solutions.

Deep Sentinel was started 3 years ago in hopes of making people feel safe again. And fortunately, for customers, it’s working tremendously. In addition, we wanted to do it at a price that’s affordable to all Americans. We combined 3 key factors in order to create a security system that actually works – world-class guards to watch cams, an incredible AI, and vertically integrated technology.

Our guards check your cameras roughly 30 times a day and respond to a broad variety of real situations, our AI never misses real-life events, and our advanced technology ensures that our camera, software, and cloud services are always up to date. Our price is competitive to ADT, at only $50/month. Deep Sentinel is not just an alarm system, we are a system of live guards watching your property and keeping you and your family safe.

Deep Sentinel Home Security Solution is the best on the market. Why?