The 5 Pillars of CPTED: Natural Surveillance

They say the best defense is a good offense.

Taking a proactive approach to protecting your family, your business, and your property is the difference between having a security system in place even though you’ve never been targeted before and installing one after a robbery so it doesn’t happen again.

The former is proactive, the latter is reactive.

If you were to put yourself in the shoes of a would-be burglar: would you rather attempt to rob a building with visible cameras, outdoor lighting, and signage indicating a security system, or a dark, unlit house right next door without any of those?

In fact, a home without a security system is 300% more likely to be targeted by thieves.

Crime prevention through environmental design — or CPTED — takes that to heart. CPTED is a philosophy that encourages the use of deliberate design elements to eliminate or reduce criminal behavior before it happens.

Those signs by the door that say “This property is protected by Acme Security”? That’s a simple example of CPTED in the real world.

But it’s just one of many.

There are many strategies and techniques that fall under the very large umbrella of crime prevention through environmental design, but they can all be segmented into one of five pillars:

Let’s take a closer look at natural surveillance and how it can be used to limit opportunities for crime to take place.

Increasing the likelihood that a criminal will be seen — or even just the appearance that they’re more likely to be seen — boosts the perceived risk to them.

The higher the risk of being observed, the smaller the chance they’ll go through with it. Research has shown that the decision to commit a crime or not is more influenced by perceived risk than it is by perceived reward.

“There must be eyes upon the street, eyes belonging to those we might call the natural proprietors of the street. The buildings on a street equipped to handle strangers and to insure the safety of both residents and strangers, must be oriented to the street. They cannot turn their backs or blank sides on it and leave it blind.” ~Jane Jacobs, The Death and Life of Great American Cities

In her book The Death and Life of Great American Cities, author and activist Jane Jacobs argued that our neighbors and other residents are our greatest asset in keeping a neighborhood safe.

We have dozens of ‘eyes on the street’ provided an area is well lit and open with clear sightlines. Your friends, neighbors, and even strangers are going to intervene or report if they see criminal activity taking place.

And that’s natural surveillance in a nutshell. 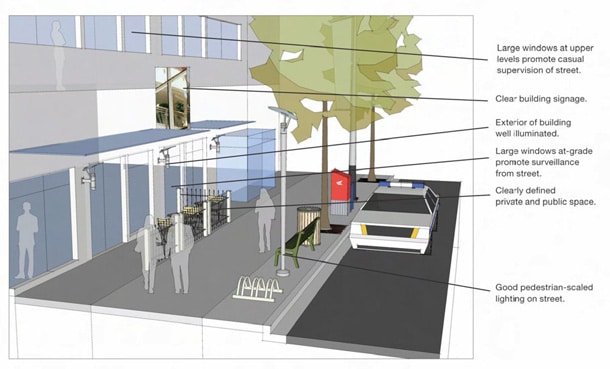 Natural Surveillance in the Real World

There’s almost always someone hanging around, and natural surveillance harnesses that fact through the placement of physical features — shrubs, fences, trees, and more — people, and activities.

High hedges may provide a lot of privacy, but they also prevent natural surveillance from happening. If your house or business can’t be seen from the street, it can’t be observed.

By keeping shrubs and plants below window levels, and trimming trees up to at least six feet so they don’t block sightlines, you’re inviting natural surveillance.

By keeping driveways, doors, and other points-of-entry well lit, you’re preventing someone from forcing their way in without the potential for witnesses.

By eliminating dark corners and overgrown vegetation — and using mirrors and lighting to remove blind corners in halls, stairways, and parking lots at your place of business — you’re eliminating hiding spots.

Increase the visibility. Decrease the opportunity for crime.

On a larger scale, street lights and well lit pathways do the same thing. Always report burnt out bulbs to the appropriate authority to help keep everyone safe.

Of course, visibility alone isn’t worth much protection. You need people.

This can be accomplished by:

More visibility, more people, more eyes. It’s no coincidence that areas with an Neighborhood Watch program — active eyes on the street — experience up to a 16% reduction in crime.

There are more than one million burglaries in the US each year, and the average value of property stolen is $2600.

Natural surveillance is an affordable first step in making sure you, your family, and your business are not part of that statistic.