In Florida, the comfort provided by warm, luxurious weather is a given. The comfort that comes from security and peace of mind, on the other hand, requires taking an active role. Security cameras are an excellent step in the right direction. But are your cameras legally compliant? After all, Florida video surveillance laws have some nuances. Here are a few considerations to keep in mind as you add cameras to your property’s security setup.

When it comes to security cameras, all people should be protected from potential voyeurism. Florida video surveillance laws ensure this. Section 810.14 of the Florida Statutes prohibits secret observation of other people when they are located in a place that provides a “reasonable expectation of privacy.” A subsection of the same law applies specifically to recording people with cameras, camcorders, or any other device capable of recording, storing, or transmitting visual images. This, too, is prohibited in locations with—here come those important words again—a “reasonable expectation of privacy.”

Regarding this ubiquitous phrase, the word “reasonable” is key. Common sense (and common decency) should make it clear which locations have such an expectation. In a private home, bathrooms and bedrooms both qualify. The changing areas in a clothing store fall under this category as well, though indirect observation is allowed by Section 877.26 if the purpose of surveillance falls under the watcher’s duties.

Note as well that the definition of a room can change, depending on what it’s being used for. A living room is a fairly public area… but what if your brother needs to crash on your couch for a month?  During that month, your living room could be legally defined as a bedroom, in theory. If there’s any ambiguity at all, it’s always best to err on the side of giving your guests more privacy, rather than less.

But what about the people who make these security cameras necessary in the first place, like intruders and trespassers? Not to worry. They automatically waived their right to privacy the moment they decided to set foot on your property uninvited.

Transparency is crucial regarding video surveillance. To record someone secretly is very bad form, but a Floridian is protected under the statute if the recording device is installed such that its presence “is clearly and immediately obvious.” The idea is that any visitors would be well aware that they’re being recorded.

If you’d rather not make the device itself quite so blatant, that’s all right, too. You can hide the cameras themselves, as long as you’ve posted written notice very clearly and obviously that a video surveillance system has been installed on the premises. So long as it’s clear to anyone and everyone that recording is going on, you are well protected under Florida video surveillance laws. This is probably most relevant to Florida business owners, but it’s worth knowing as a homeowner, too. 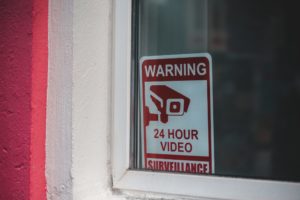 The Question of Consent

If you’ve got conspicuousness covered and you’ve avoided private locations, your right to record is solidly secured. Do you want to place surveillance cameras in a public space in Florida? You can. Do you need consent from every single being recorded? You do not. Do you need consent for hidden or camouflaged security cameras? Not at all, if you’ve posted obvious signage.

One caveat, though: Audio recording is a different matter entirely. Florida is one of 15 “all-party consent” states. What does that mean? To record any sound, you absolutely do need permission from every single participant in the conversation. That consent needs to be given in writing. A simple verbal agreement won’t do. Many security cameras automatically record audio in addition to video, so this is something at least to be aware of.

Note, however, that it’s only a consideration if the audio recording is going to be publicly aired or disseminated. When you invite your plumber in to fix a leak, you don’t have to give him a form to sign that agrees to his polite small talk being recorded… unless you plan on sampling that small talk and using it in an upcoming hip-hop track, as an example. For that, you’ll need a permission slip.

If you own a condo, then all the above rules apply to any surveillance inside your unit. Take special care, however, when considering pointing cameras at external areas. Hallways, common areas, neighboring balconies, etc., may not seem like places with a reasonable expectation of privacy. However, condominium boards may place additional qualifications that are stricter than state laws. Check with them before doing anything even remotely debatable.

Meanwhile, if you’ve got interior surveillance set up in your condo, don’t keep that a secret if you ever decide to rent out part or all of the unit to someone else. A hidden camera could get you arrested, as was the case for an Airbnb host in Longboat Key who was charged with video voyeurism.

If you’re setting up a basic recording device inside your own home, then you can leave paperwork out of it. However, someone with a license must perform any camera installation involving construction. If that’s going to be you, you’ll have to get one from the Electrical Contractors’ Licensing Board.

Furthermore, professional installation is advisable for anything beyond simple wireless security cameras. Setting up a camera system outside your home, for example, requires an understanding of ideal camera placement to fully cover your perimeter. (Don’t worry about Deep Sentinel wireless cameras! You can easily install them yourself in under 30 minutes, and we’ll help you with placement.) Installation may involve drilling into walls, which—if inexpertly performed—might damage or expose wires, creating fire hazards.

A professional contractor has the knowledge required to bypass these dangers, ensuring a safe and efficient installation. Some security systems also require making deliberate changes to your home’s electrical wiring, another complicated process that is best left to a licensed professional contractor. That’s why Deep Sentinel maintains a network of certified professional installers for hard-wired Power-over-Ethernet cameras.

The Sunshine State is a reasonable place when it comes to recorded surveillance. Federal security camera laws already have you covered in many respects, but the Florida-specific statutes are largely intuitive for all of us with basic common sense and a healthy respect for individual privacy. For any Floridians looking to increase their peace of mind by installing home security cameras, the law is on your side.